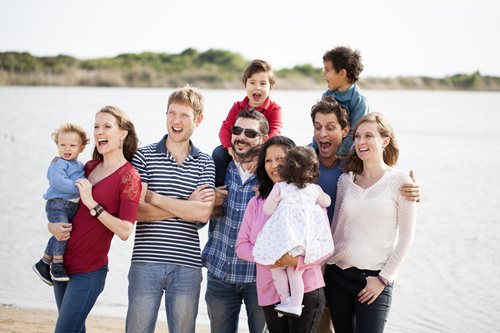 “You seem like you’re walking on eggshells,” our family therapist told me with a wise nod. The image of cracked eggs under my bare feet was strangely comforting compared to what our family was really going through. We were living with mental illness, specifically bipolar disorder.

Psychiatrists don’t know enough about how to help families in this situation. I should know—I’m a psychiatrist myself. When mental illness hit my home, I read everything I could. With some trial and (a lot of) error, I found a few principles worth leaning on when someone in your family has a mental illness:

There’s a paradox to mood disorders, like bipolar. They make the family anxious, and they make the patient misread that anxiety as anger. This is no one’s fault—it’s due to a faulty switch in the part of the brain that reads faces (the amygdala). The raised eyebrows, tense muscles and pitched voice of anxiety feel like an attack to someone going through mania or depression.

In contrast, body language that conveys warmth, acceptance and compassion has a healing effect on the brain. Calming interactions help stabilize the neurohormones that regulate mood. Families that make frequent empathic comments have higher recovery rates in bipolar. These can include simple empathic statements like, “I see your point” or “I know what you mean,” as well as more specific ones like “It must be hard to go through the motions each day when you’re depressed.”

These gentler emotions are hard to come by during a crisis, so if you’re not feeling it you may need to practice acting the opposite of your emotions. Visualization can help. Just as an athlete imagines the ball going through the goal, picture someone who exudes warmth and calm. A favorite uncle, a minister or an actor like Judd Hirsch or Fred Rogers. You may feel like an actor yourself at first. As they say – “fake it ‘til you make it.”

Mental illness doesn’t respond well to ordinary problem-solving. In fact, looking for problems to solve can make the situation worse. Families have much greater success when they give up all that poking and prodding. Look for the positive in your relative—like the progress they’ve made. Notice how they came to dinner, instead of reminding them that they stayed in bed all day. It helps to know the signs/symptoms of mental illness, but it doesn’t help to point them out. Notice the healthy parts of your relative, because what you shine a light on is what will grow.

Of course, you’ll still need to discuss problems, but reserve those for a regular, scheduled family meeting. Without this kind of structure, people can feel as though they are never safe from criticism and attack. During your meeting, use a neutral, “just-the-facts” tone. Avoid discussing people’s intentions or how the illness affects you personally—those are hot-buttons that can quickly spiral into conflict when you’re living with a mood disorder.

If this advice sounds hard to follow, it’s not. It’s impossible. No one can get it right all the time. Fortunately, it’s usually good enough just to adjust your ratio: Raise the warmth and positivity, and decrease the anger, criticism and tension. When you can’t do that, insert a long pause by going into separate rooms. Make an agreement with your relative to stay apart if either of you get too hot-headed. Decide on a signal for this time-out, like hanging a scarf on the doorknob.

The message here is not to just accept everything, rather, it’s that words alone won’t solve your problems. Families need to plan ahead for dangerous or destructive behavior. This involves action, not words. Your relative experiencing mental illness should have a strong voice in the plan. Problems to anticipate include violence, suicidal behavior, substance abuse, overspending and fights that impact children in the home. Hospitalization is not the only solution. Consider temporarily living apart, locking away guns or extra medication and allowing family members to contact the treatment team or come to an appointment.

These tips are unlikely to lead to dramatic cures, but they do improve the lives of people experiencing bipolar, depression, and schizophrenia. It’s a short list, and Dr. Jim Phelps and I have gathered a few more in our book, Bipolar, Not So Much.

The hard part is sticking to the basics, because grander problem-solving tends to backfire. Recovery is often slow, and it takes patience and some bravery to make it through. The world may accuse you of enabling the illness—and your relative may not thank you either—but you are doing what’s best for your loved one. And don’t forget to reward yourself along the way—you’ll need a healthy dose of warmth and positivity as well.

Learn how to tell your mental health story, hear from experts, and speak directly to your legislators to spark change! Register for Action Online: www.namiwisconsin.org/action-online ... See MoreSee Less